Once Upon a time there was a Toy Factory…well, it really wasn’t a factory; it was more of a performance recycling art store installation event where anyone who came in could be an artist, or just watch.  A towering heap of broken toys lying in the middle of a 12 by 24 foot table were reconﬁgured into artworks, You could make your own and buy it as well. 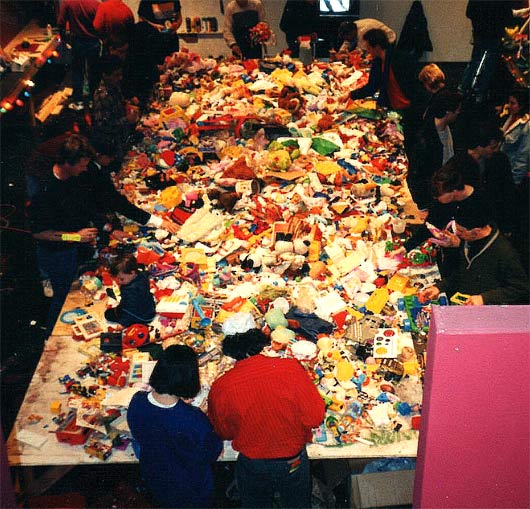 It all started in December during the holiday season. I was walking outside my art studio on the margins of the city of San Francisco when I came across a beat up dirty abandoned stuffed toy ﬁgure lying in the ghetto gutter.  It looked so sad and made me think of all the forgotten people in the city. I took it home and it stayed with me, the sadness and the toy ﬁgure. An artist friend Matias Jaramillo met me at a cheap bar and over several beers we discussed how there was little for visual artists to do to contribute to the holiday season. The abandoned toy came up and we worked out the details to create an event and call it The Toy Factory. Matias was the most joyous uplifting absurd artist I knew and the perfect work partner to enter into this type of project.  We approached Artspace SF with the idea and of course they said yes because it was the coolest exhibition space in town run by intelligent informed people who liked to have fun. We began to collect battered broken toys from good will stores and eventually the local ﬁremen’s Toys for Tots program started saving their broken or dirty toys and giving them to us.  All the money went back to the Toys for Tots program to buy new toys for kids. Trash became art which became cash to buy new toys. It was the ultimate in recycling. The artists felt good and were being useful in an obvious way.

What was created there were some of the ﬁnest conceptual art objects I have ever seen. The toys were glued, ripped, poked, shredded, painted, stitched up and put together in strange new ways. These objects ranged from hilarious to heartbreaking, beautiful and magical to twisted and rude, some were thought provoking, others incredibly dumb. Just like everyday life. Beautiful.

Fearless Anne MacDonald is always willing to stick her neck out for the artists in the community. Thank you Anne for being so generous and hosting this project at Artspace for 5 years in a row.