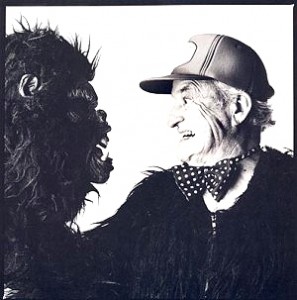 Rene di Rosa, known for his sense of humor as well as his philanthrophy, was caught on film in
this photo by his stepson, photographer Jock McDonald.

Rene di Rosa, a newspaperman who made his mark on the Napa Valley as a
vineyardist, art collector and philanthropist, died Sunday at 91.

Friends remember him as an irreverent spirit who help put the Carneros on the map as a wine region, then converted a portion of his property into an “art preserve” — today known as di Rosa — where utterly modern sculptures and paintings from Northern California artists of the past 50 years are on public display.

“My heart is heavy,” longtime friend Margrit Mondavi said Monday. “We have lost a wonderful character and a great Renaissance man.” Di Rosa, the son of a Midwestern heiress, Maude Cupples Scudder, and an Italian diplomat, Gustavo di Rosa, was born in Boston in 1919. After studying at
Yale he moved to Paris where, in his own words, he failed to write the “great American novel.” Instead, di Rosa developed a lifelong appreciation for artists. He subsequently worked as a reporter for the San Francisco Chronicle and in the 1960s bought a 450-acre ranch in the Carneros region, an agricultural region south of Napa that had languished since Prohibition.

“He was the pioneer for Carneros,” said vintner Amelia Ceja. “He really catapulted Carneros to prominence. I am so grateful that I met him. He was great fun, such a colorful personality.”

Di Rosa took viticulture classes at UC Davis but also found his way into the school’s art department where he met such artists as Robert Arneson, Roy De Forest, Manuel Neri and William T. Wiley early in their careers. Many of their works became the backbone of the di Rosa collection.

In 1974 di Rosa married Veronica Pridham McDonald, a Canadian-born painter and sculptor. Together they expanded the di Rosa art collection and in 1982 formed the Rene and Veronica di Rosa Foundation. Di Rosa sold half of his property to Seagrams in 1986. With the proceeds from the sale, he embarked on collecting art, the passion that filled the latter part of his life.

Today, amid the vineyard-covered hills of Carneros, sits di Rosa’s serene preserve of art and nature, which houses his art collection of more than 2,000 works from Northern California artists. “His collection is a treasure,” Mondavi said. “He really wanted to support artists,” said Napa Valley artist Gale Chase Bien, whose work is in the collection and who now serves on the board of di Rosa. “He
treated artists with respect,” she said. Di Rosa was “someone who not only loves art — but local art — and who digs deeply to understand what makes an artist work,” she said. “He is irreplaceable.”

“He wanted people to have a place to get away — and to have fun,” said his friend of 50 years, Harris Nussbaum, a retired teacher who once co-owned Brewster’s Army-Navy store in downtown Napa. That’s where the pair met when di Rosa went to buy shovels for his new ranch, said Nussbaum, who went on to become a supporter of di Rosa’s projects.

Nussbaum said Di Rosa died of diffuse Lewy body disease, a progressive brain disease related to Alzheimer’s and Parkinson’s. “He had such an impact on people,” Nussbaum said. “He liked to get a reaction from people.” This spirit, he added, was reflected in the art di Rosa chose. “Some of it was zany, crazy, irreverent,” he said.

“I knew him first as a vintner,” Mondavi said, “but he was so special. Everything about him was special. He had an extraordinary sense of humor … his art collection is a treasure.”

“I don’t think the valley will ever be able to (duplicate) all that he has contributed,” Chase Bien said, noting that Di Rosa’s nonprofit foundation is in place to continue his arts legacy. “That was very important to him,” she said. “What I am really going to miss is that he’s not going to be showing up at openings. He loved what he was doing — and he knew the words to every Cole Porter song,” Chase Bien said/

Di Rosa is survived by a first cousin, Rosalie Ewing of St. Louis and stepchildren Andrea Flaa of Vancouver and Jock McDonald of Pasadena. 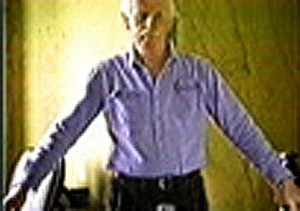 David Kenneth Ireland (August 25, 1930 – May 17, 2009) was an American artist and co-founder of the Capp Street Project artist residency.

Born in Bellingham, Washington, he studied Printmaking and Industrial Arts at California College of Arts and Crafts, prior to joining the Army in the early 1950s. After leaving the Army Ireland traveled Europe extensively, working as an illustrator, and eventually traveled to Africa to lead safaris. It was not until his 40s that Ireland decided to dedicate himself to work as a full-time artist. He returned to the United States and returned to school, this time at the San Francisco Art Institute. Upon graduating from the San Francisco Art Institute Ireland spent a year working in New York, before returning to settle in San Francisco.

Ireland is most well known for creating site-speciﬁc installation art pieces; most notably, his former residence at 500 Capp St. In 1999, Ireland collaborated with sound artist GX Jupitter-Larsen remixing and re-recording tapes from the audio achieves of 500 Capp St. The outcome was  released as a CD on Vinyl Communications.